I’ve been secretly working on a government project to enable squirrels to run completely across the road instead of stalling halfway then pretty much actively seeking death. So far it’s been a rip-roaring failure.

Squirrels just don’t get it, man…

Ok, even though there’s truth to squirrelicide, there is no government project to help end it (or you don’t have the clearance to know about it). I’ve actually been on a sabbatical, AKA the word that sounds more acceptable than “unemployment.” I wasn’t fired or anything, FYI–my contract just ran out and I had no desire to re-up it.

Working 6 days a week for a year straight somehow lost its appeal (imagine that!). I was burnt out, ragged, and unable to address the depression that I’d been ignoring like the bump under your skin that you keep telling yourself is just an ingrown hair.  Like Peter Steele once sang, “Life is Killing Me”.

Anxiety and depression had me by the short hairs (Still does from time-to-time, as was displayed just yesterday. I rocked in place, trying to chant some made up mantra to chase the hornets from my brainmeats. I haven’t had a bad day like that in a while–what the late, great Wesley Willis would call a “Hell Ride”. Never fun.

All hilarity aside, I just didn’t think anything was worth posting about. Everyone has had their own batch of junk-kicking nonsense to deal with this year.

Folks have been corpsifying left and right, and you know if Death figured out how to kill Lemmy, then all bets are off. Mercury is in retrograde, Uranus is in The House of Pancakes, and that’s not even a jab at our current state of politics. I don’t do politics. They do me. *Rimshot*

Gravenfrost has still been finding homes all over the place, and I’m grateful for it. (If you have and enjoyed your own copy, do me a favor and give it a rating and/or review on Amazon and Goodreads, please! Shameless plug over) 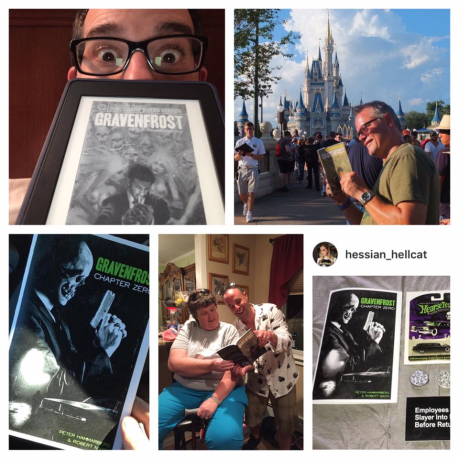 It even made it to Disney!

My Better Half, Christina, has been shining light into people’s lives with her inspirational channeled messages. She deserves her own book series and TV show with her talented brother Joseph D’Airo. They are a gift to this dark world.

Robert Nixon and I have been keeping our  noses to the gravestone, and are currently working on a series of Zines called “Small Bastard Stories,” which are basically just that. We shoot ideas back and forth until something forms, and I’ll flesh it out. Then he flashes it up. Hopefully the series will be available soon! Horror and hijinks. Like Futurama’s The Scary Door, only with more gore and cussing. Or something along those lines…

We also submitted a comic book script to the groovy ghouls over at Sex and Monsters for consideration in their 2017 line up. Fingers crossed, everyone! Check them out when you get a chance. Especially there newest releases, TALES FROM GRIM COUNTY, and TIKI SURF WITCHES WANT BLOOD! So much fun, I tells ya!

I’ll do the obligatory “I’ll post more, I promise!” statement now…and I will will WILL try to be in your feed like so much [insert favorite food]. In the meantime I’ll be here, trying to get the damn hang of eating soup without it getting all over my beard.

Scruffy looking word herder. Merchant of Fiction. Author of Gravenfrost, Antillia, and The Mermaid of Maxport. View all posts by Peter Hammarberg

This site uses Akismet to reduce spam. Learn how your comment data is processed.